All the club will be closed for training over Xmas as follows;

Last training date is Thursday 21st December with first session of the new year being Wednesday 3rd Jan 2018…have a great and peaceful Xmas.

Congratulations to Sophie King, Louie Stadler and James Wright who were nominated by the coaches and teaching staff for swimmer of the month.

Well done to Louie Stadler who was selected the winner for overall improvement and attitude during training.

Christmas is approaching, so just a reminder to keep these dates free in your diary. There are a lot of forms that are being distributed, so please ensure you hand them back in to the coaches way in advance of the deadline day to make our roles easier.

Selections for this league fixture will be made over the next week. The venue will be communicated through text message. Please note that selections for the gala cannot always be guaranteed.

All swimmers and their family are welcome to come along to our Presidents Evening. Awards will be presented around 16:00-16:30pm with the “splash & fun” beginning at 15:00pm. The slides, floats and inflatables will be available with lots of music!

Dan is managing this club gala. Forms are being handed out for this event, and you must hand them back in asap! Please see Dan’s post for more information.

Selections for this league fixture will be as soon as practicably possible. The venue, warm up and start time will be communicated through text message. After our promotion last season, we will now be competing in division one. Please note that selections for the gala cannot always be guaranteed.

Forms for this event will be handed out on Monday evening. This is a great chance for main and development squads to come together to develop their race skills, knowledge, and to take part in land training and team building activities. Please read the forms as the Winter Sprint Gala is connected to this event. These forms will need to be handed back in with payment by 21st December 2017.

Kyle is managing this club gala. The license application is currently pending approval. Forms will be handed out starting on Monday evening. Please hand back in before 21st December 2017 along with payment.

Only 2 days left to make your vote count!

Please vote and be the difference!

Thanks for your continued support…

Coach reports for the following events are now uploaded to the results section of the website, with all corresponding swimmers times uploaded to the members section. Thanks to Rob for collating and all those who swam, helped and supported through the events;

Ghoul In The Pool

It’s been a busy period with a lot of open meets and galas taking place, so instead of an individual post for each meet, here is a round up of all competitions with the highlights.

Six swimmers were representing Ilkeston at the LE Distance Open at Queens Street in Derby. James & Sam were both in the 1500m Freestyle, which started in the morning. The first time that James had raced this event and he paced it well coming in on a 21.08.74. Sam has swam the event before, so he knew what to expect. Sam was consistent with his entry time, and also racing his final 1500m under Team Ilkeston.

Session three was Erin and Eve who were both racing the 800m Freestyle for the first time. Both swimmers looked strong and skillful with Erin posting a 11.53.18, and Eve coming in at 11.20.28. To finish off the third session, Angela Guilfoyle completed her 800m in a time of 10.50.07.

Session four, the final session of the day! Eja in the 400m Individual Medley – again the first time that she had raced this officially for a time on the rankings. A good swim coming in at 6.00.63 in first place.

Overall, a great meet for our swimmers, especially pleased to see them giving the distances a go! Well done all – results will be available in the members section asap.

“Ghoul in the Pool”

A total of 28 top six finishes. Team Ilkeston came 7th top club out of 19 competing teams. In addition, the top girl and boy results included two of our swimmers. Lewis Wright in 16th position with 19 points, and James Wright in 2nd position with 32 points – just 3 off the top boy).

East Midland regional qualifications have been achieved at this open meet by:

Well done to all swimmers!

The results for these two open meets will be available to view in the members area asap.

Entry forms are now being handed out by the coaching team. If you haven’t been handed an entry form, please ask a coach for one.

Once entered if a swimmer is then unable to participate, please notify a member of the coaching team as swimmers will be placed in a team and allocated races once entered, so then the swimmer will need to be removed from the team and races if they will not be participating. If we aren’t notified then this will have to be done on the day which we would like to avoid having to do.

The entry fee for spectators is £1.50. Programmes are provided.

A Cake Sale and Raffle will also take place on the day.

If you have any question or queries about the Gala, then please speak to a member of the coaching team.

In order to successfully run this gala, we require a range of helpers. If you are able to help on the day then please let Dan Sloan know. All help is much appreciated.

Team Ilkeston were hosting round 2 at Bramcote L.C on Saturday evening. It was another tough round in the NASL, but much improved from round 1 with a lot more swimmers in attendance, which made it a lot more manageable.

Eja Coe (50m Backstroke), Lewis Wright (100m Butterfly) and James Wright (100m Freestyle), all racing to first place finishes in their respective age groups and races. In the relay events, the 11/U girls were on form in their Medley Relay coming in first place in a time of 2.38.91, in comparison to round one with a 2.46.07.

That made a total of 21 top three placings out out 50 events.

It was a close gala with just 20 points separating us from 3rd place on the night. Basic mistakes such as setting off too early in a relay in this league will ultimately be the difference between finishing bottom or a place in the top three. The standard of judging is very high, so you have to be able to keep calm in these situations. Going forward, the mistakes that we made in this round will be learned from and going into the third round we’ll be much stronger. Remember – these aren’t failures, these are opportunities to learn and develop.

Final points and placings on the night were: 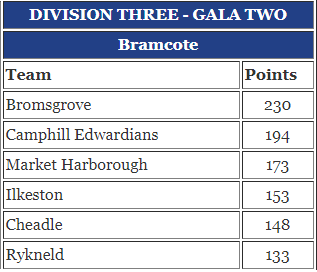 Well done to all swimmers that raced on the night!

As you all know, we hosted the league gala, and it required a lot of helpers to make it a success. So, thank you to all that helped in all of your positions on the night, from officiating in all roles, team management, recording, announcing, door entry, health and safety, refreshments, lane end and splits. It is really appreciated!